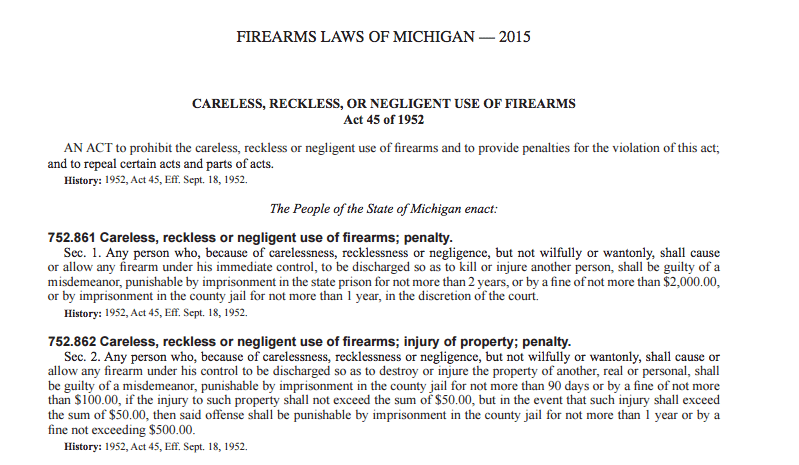 Why do we always want to punish people over the bad choices others make in life?

Let’s look at a recent case in Detroit.

A gaggle of teens find a gun in their grandmothers bedroom; supposedly unloaded according to reports in the media, and use it to scare another teen to death…literally.

So the teens find the weapon, one of them loads it and giggling with anticipation they present the weapon to the dead teen in an attempt to “scare him”, the gun discharges striking the 13 year old in the chest, another promising young man in Detroit dead.

Why they loaded it if it was in fact unloaded, I don’t know, but let’s keep going here.

So, the teens in question, 3 of them ranging in age from 13-15 years old make a terrible choice and end up killing another.

The intent to kill wasn’t there in this scenario, just to scare the crap out of the dead teen if you’re to believe all the reports. I’m going to break all the rules and do just that right now.

They made a choice by removing the weapon and playing with it.

So now the police, Detroit in this case, are holding a hard working woman in custody because the gun she owns was insecure, unsecured…whatever.

This isn’t the first time that’s happened in Detroit, just the latest.

So we have 3 teens who made a bad choice and tossed personal responsibility out the window, a dead teen who’s only mistake was being in the wrong place at the wrong time, and a grandmother now facing a criminal record over those bad choices made by the 3 teens.

There are no laws in Michigan requiring owners of firearms to secure those firearms with gunlocks or safes.

There are laws on the books for control of firearms: (Page 156)

752.861 Careless, reckless or negligent use of firearms; penalty.

Sec. 1. Any person who, because of carelessness, recklessness or negligence, but not wilfully or wantonly, shall cause or allow any firearm under his immediate control, to be discharged so as to kill or injure another person, shall be guilty of a misdemeanor, punishable by imprisonment in the state prison for not more than 2 years, or by a fine of not more than $2,000.00, or by imprisonment in the county jail for not more than 1 year, in the discretion of the court.

Does it make sense to have a weapon secured with a gunlock? Of course it does, especially when you have young children in the home.

In this case, I’d argue that teens ranging in age between 13-15 aren’t kids, though.

If the weapon is there for self defense, no. There are no weapons here that are secured by gunlocks. That would defeat the purpose of having the weapon ready for use in the case it was needed.

There are also no children present in our home. Zero, grandchildren or otherwise. None. Would those weapons be secured if there was, of course.

If our home is left unattended, yes, they’re secured behind a moat filled with Nile crocodiles.

If we make laws punishing people for the poor choices of others, what would stop our lawmakers from drafting a law punishing my wife if I went outside in slippers during a period of ice and snow, then fell on my fat ass when I slipped on a patch of ice? (This just happened, leave her alone, I made a bad choice)

We cannot legislate stupid, irresponsibility, carelessness. If there’s intent to harm, injure or maim, then yes, but there are laws on the books for that.

Police said they believe the shooting is a result of a gun owner failing to properly secure her weapon.

The Detroit Scanner believes the shooting is a result of stupid teens making stupid choices.

Update: Autopsy reports state the teen was shot in the back, not the chest. A game changer?